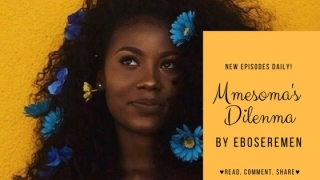 
Now that Dara was finally assured of my continued existence, I had to also tell them of what mummy had revealed to me.

Me: Guys, listen up, this is important.

Ezinne: What happened? I saw mommy enter your room, I hope nothing worse has happened?

Me: No, all is not well and it just got worse. Well, mummy and daddy did not call the Arsenal, someone else did and I can swear it is that Mrs . Chibueze.

Ezinne: Babe, chill, don’t be so sure. Maybe she heard gist na.

Dara: Girl, how? This just happened yesterday. Except she is a witch, how she want take know?

Ezinne: Isn’t she a witch?

Me: You guys be serious joor. Lmaooo.

Me: Anyhow sha, grandma is more involved in this than we thought o. She is at the centre of all this. Mummy said that this engagement had been planned nefore we were born, clearly this is a case of friends who really wanted their grandkids to marry each other.

Dara: Wawuuu! From what I have heard about her she would definitely do everything possible to ensure this marriage happens.

Ezinne: She has already put her plan in motion na, she threatened to disown Meso if she rejected this proposal.

Me: Yeah, and she says that except I agree, there is no way I am resuming school next week, that is the one that it is really scaring me. I have to resume early

. Not the one I will go and resume by 2nd week and I will be looking for note and bed space up and down.

Mummy said the engagement was not something that was decided today; in fact it was decided long before either Afam or I were born by our wonderful grandmothers, I am guessing his paternal grandmother too.

Ezinne: No wonder she is so involved in this.

Me: Yeah, mummy made me understand that there is no use fighting because she would make sure she wins and I will not lie I am terrified, I need to get out of this house by the end of the week, not only so I can resume but also so I do not lose my mind, which is bound to happen with her on premises.

Ezinne: Okay, calm down, we would figure something out. For now though, just stay out of her way and out of her wahala. Een if aunty Kainene is trying to rope you into an argument, do not let it work. They will just capitalize on anything now just so they can mess you up and get you married.

Dara: Wow. This one haff pass be careful. Your grandma sounds like that boss in the Devil Wears Prada

Me: Yeah, we know, she is annoying asf.

Ezinne: You are funny o. She cannot try that one, even I am not going for dinner, anything to avoid those women. Dubem would represent the Agu children at the dinner table tonight.

Dara: Lmao! Okay na, I have to go now, my mum is screaming my name.

Immediately, mommy began to scream Ezinne’s name and she went offline too. I was in no mood to talk to any other person; I wanted to eat dinner then continue sleeping. Then, I wanted to wake up and realize that all this was a dream and instead I was preparing to go back to school and planning ways to keep Dara out of too much trouble.

But if wishes were horses, beggars would ride.

Maybe I was over thinking everything, who knows, maybe my fate was to find love in an arranged marriage and fighting it would only mess things up for me. But I could not help it; I just had to think about it all the time, I wondered if Afam was under the same pressure I was under, although I really doubted it, because looking at the facts, one would see that he was perfectly fine with this union, I was the one claiming HIV positive and pulling tricks out of my hat.

If only I had been born in a regular home where my biggest worries were getting good grades and waking up early enough to chores.

Those were also very important worries of mine, but nothing trumps trying to get your fiancé to cancel the engagement you had been roped into prior to your birth, definitely nothing could beat that.

My phone began to ring, it was a strange number and I ignored it. I would call the person much later when I am feeling less depressed, but the person did not get the hint and 4 missed calls later I was picking the call.

“Hello, I am in no mood to talk right now. Who is this?” I said, instantly regretting my words as soon as they left my mouth. I began to apologize but the person shushed me.

Hey! Do not shush me!

“Meso, are you really going to marry him?” the caller asked.

Gods of my ancestors! Tobenna Chibueze was calling me and he sounded so tense.

“Tobe, are you sure you should be calling me and sound all hot and bothered? This union is not really my decision to make, abi have you not heard the latest gist? This union is bigger than any of us; it was made before we were born. Simply romantic and cliché right?” I asked rhetorically, rolling my eyes.

“Meso, I do not want to lose you to him, think about this, I would anything to help”, he said, sounding so desperate.

“You don’t say dude”, I thought to myself as I hung up.

There was a way to leave this house, for school, after all.