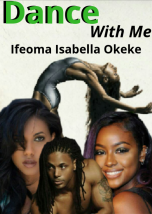 About a young singer, Nora, who was involve in a accident when she was young that rendered her blind and taking her voice.

Seeing that she was of no use again, her parents sent her to live with her grandmother, who lived in another country.

Her parents neglected her and they focused on her twin sister, Lola, who also has the voice of an angel.

No one knew Lola actually caused the accident except Nora.

Nora accidentally walked into an ancient garden and became friends with a dancing fairy who taught her the ancient legendary dancing moves.

She grew up changing her name to Ora and was known as the Goddess of dance.

David, a guy who Lola has a crush on, fall in love with Ora when he first saw her.

The two sisters meet again but this time, as rivals.

Who will be the best? Nora? Lola?

Will Nora ever forgive her parents?

Will Nora ever find her voice and see once again?

A story full of betrayal, hatred, Jealousy, Passion and Love.