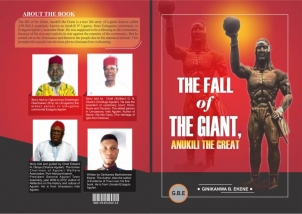 The Fall Of The Giant, Anukili The Great - Episode 7

The eldest man from Ivite did exactly what was suggested. He assembled all their young men immediately telling them that the throne is not for all, but for those who are brave and have contributed to the progress of Agulueri and have fought for the land. The person must be ready to lead and protect them, and must have good intentions as well. He also said it was well-known that the three quarters of Aguleri were not united, therefore they needed a king who will bring them together as one like Aguleri their forefather did when he was alive . Then he asked them to state their intentions one after the other before the elders of the three quarters of Aguleri.
As the young men were giving their manifestos, Anukili walked in. As soon as they saw him coming in, they all kept still. The elders and Erenmuo stared at one another, smiled and muttered, “It seems our plan is going to work out after all”.
Anukili stared at every one of them and said, “According to the demand of the elders, I Anukili deserve to be crowned; I have fought for and defended Aguleri so many times on different occasions. In addition to what I have done, if it would cost my life to protect you all, I will gleefully give up my last breath. With me Anukili as your king, I will unite the three quarters of Aguleri and there will be equal rights among all and in so doing peace will reign”.
While Anukili was still talking, the Elders stood up giving him a standing ovation, calling him different great names

All episodes of this story can be found here >> https://www.ebonystory.com/story/the-fall-of-the-giant-anukili-the-great

. “Anukili you deserve the kingship, your kind we have long wished to have as our king. As the mighty warrior you are, we believe that nobody here will be gallant enough to challenge you, or is there anyone here who wants to challenge him?” One of the elders asked the young men. Silence followed.

. An elder requested to know once more saying, “If there is any man who wishes to contest against Anukili, let him speak now or forever hold his peace”. The young men grumbled. The elder continued, facing Anukili, “it is now justified that you ought to be crowned the king of Aguleri. But your installation as the Eze Aguleri will be after the occasion that will commence tomorrow afternoon, so go home get prepared and wait for tomorrow to come”. The elder’s laud on Anukili was just to accomplish that mission.
The young men wept bitterly because they knew this was going to happen and it finally happened. They said Anukili whose harassment made life difficult for them in Eziagulu was pronounced the winner of the contest. “Is it because most of the elders were not from Eziagulu or were they not aware of the hardship we go through just because of Anukili?” One of them asked.
No! Something must have gone wrong somewhere; our elders can’t just choose Anukili like that. It is either they were afraid of him or they have taken bribe from him”, another said.
The Elders were mocked and affronted by the villagers. They were said to be dishonest and called different mocking names. A number of them were even denied their right of being served meals at their various homes; some were not even greeted by their wives and children. But they simply laughed over and tolerated all that had been said and done to them because the villagers were ignorant of their plan.

Other Episodes of The Fall Of The Giant, Anukili The Great ↓