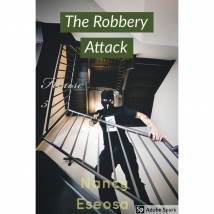 With less than one week to the robbery attack, with no help in sight, every occupant had left their faith and hope into God’s hand. Seun had retold his story to every occupant. The story made people believe the tales of the ‘Men of the Night’ and instilled fear. That's  why when Cynthia suggested we pray and fast, everyone bought the idea. I was surprised at the outcome on the first day  and second day of the two days fasting and prayer . The ten of us were present which was different as compared to before when one person from each flats comes to represent the family or not come at all. The way and manner my fellow occupants prayed  made me believe some persons are warriors and champions when it came to prayers. Akpan joined us eventually during the prayers which left everyone stunned.

Dayo was asked to lead the final prayers and as he did, when it was time for the final Amen, it was thunderous that I had shivers and we opened our eyes to hear a banging at the gate.

Akpan ran to the gate as we all looked to who our unexpected visitor was at 8pm.

“Who be that” Akpan asked.

“Good evening sir, Akpan said as he opened the gate.

All episodes of this story can be found here >> https://www.ebonystory.com/story/the-robbery-attack

. To make matters worse, he is best friends with our landlord. We are not surprised when our landlord gets a wind of matters before we plan to call him

We giggled. Seun walked closer to him and we followed to hear what he came to say this time.

“Good evening, Sir” Seun said as they finally stood opposite each other.

“Good evening, Seun. It seems you people have started a church in my friend’s premises” Mr Salami asked.

The ladies started to giggle. Seun turned and gave us a stare which brought the laughter to an abrupt end.

“It’s not a church sir, we are praying as a household for the protection of the occupants of this house”. Seun said.

“Okay, if you say so” Mr Salami replied and started walking out.

When he got close to the gate, he stopped and turned around.

“Please take it down a notch, you might cause an earthquake” he said finally and walked out.

I told you he was nosy.

Two days to the robbery...

After work, I arrived home with the kids from school

After changing from my work clothes, I microwaved the beans I had in the fridge and fried plantain for the kids.

It was 7pm when Seun entered the house. It was unlike him to return home after 6pm except Fridays when he’s hanging with the guys.

He walked up to me and planted a kiss on my lips. I kissed back and it lingered on for about a minute.

“Ewwww” the kids said in unison.

“That’s how y'all were born”. Seun replied giggling

I smiled. Seun was a wonderful human. In our 10years of marriage, though we have had our fights and argument but we were love sick puppies. We met in the University when I was in my third year and he was in his fifth year. Our relationship blossomed and after school, few bucks in our accounts we had a small wedding and he promised me we would have a bigger celebration during our Ten year anniversary. All these retrospective thinking made me fall in love with him more. We might have another baby tonight with the way I was feeling.

“Hello kids, I got something for everyone” Seun announced.

Then I noticed the bag he had. I walked to meet him and the kids as they sat down waiting for dad to unveil his gifts. He brought out fire crackers, big jar of glue, ropes, sticky paints, some sweets, chocolate, and biscuits.

It seemed I was watching Home Alone all over again.

“We are going to protect our house and be vigilante!!!”

I simply stared at my darling husband who few moments ago I already had different immoral thoughts of what we would do later at night. All I wanted to do was turnover his buttocks and give him a big ass whooping.

“It’s a man’s duty to protect the house. So I and my boys would guard the house.

"What about me daddy". Tara asked

"You and mummy would hide inside the house”. He said looking at me.

With my hand on my jaw, and a sarcastic look, I held my gaze as Tobi continued to tap me to carry him on my laps.

“Baby why are you quiet?” Seun asked as he shared some sweet for the kids.

“What do you want me to say Seun? You want to kill my children abi” I asked.

He ignored me. As he continued analysing his new tools and drawing a plan with Tayo.

I was putting clothes in the washing machine since the power was restored. Seun walked up behind me and hugged me from behind.

“Mrs Adeleke, my one and only. You know I can’t live without you abi?”

“What was that show in the sitting room, jar of strong glue, the traps?”  I asked

“We agreed to take matters into our hands, since we can’t contact the authorities. So I’m protecting my house. If they can’t enter, they would run away.”

I placed my hands on my head, fake crying

“This man has killed me o. Oh my father, I’m too young to die o. My first child hasn’t entered the University. I haven’t travelled to more than 3 countries.

Read " The Longest Night " by the same author ( Nancy Eseosa )

. I haven’t even eaten plenty oyinbo food nor have plenty designer clothes and shoes in my closet and this man want to kill me. Please save us”.

He walked away smiling after giving me a peck.

“Relax baby, your man got this” he said

Next morning by 6am I heard a knock on my door. I ran to the door to find Cynthia, Chinwe and Kemi at the door.

“Morning ladies” I said immediately I opened the door.

“My husband wants to kill me before my time oh” Cynthia exclaimed.

“Dayo is insisting on being a vigilante and protecting the house. He said it was Seun’s idea”. Kemi said

“Welcome to my dilemma, Seun came back home yesterday with glue and a lot of other items saying he wants to protect the house. He recruited the help of Tobi and his brother. Can you imagine?”

“I thought it was a joke at first, until I heard him talking to Seun about the plan to put glue on the steps of the porch, and how they were going to electrify the door knob”. Chinwe said

“It sounds like home alone and they are playing Macaulay Culkin” Kemi said.

“We have to fast and pray again” Cynthia said

“And this time, we are praying for our husbands”.

“Ladies, take it easy and trust us. We know what we are doing. Just a little faith” Seun said and walked away.

The ladies left my apartment to prepare for the hustle of the day and to pray for the removal of this plague and that our respective husbands thinking be set straight.

Other Episodes of The Robbery Attack ↓