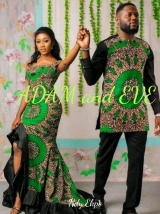 
Being a late riser,Eve woke up at  10am,it's been three days after knowing she was about to be married,she couldn't get herself to tell her friends
How can I tell them I'm getting married to an old man?
Eve! Her mum's voice from the other room got her attention
"Yes mum". She replied and hurriedly went to meet her mum,calling her name the second time always makes it sounds more like a curse on the first woman on Earth . And besides that ,Eve was trying to get along with her mum,at least they were the only ones at home
"How are you ?
'Fine mum!Eve replied, leaving the door and wandering be into the room," dad's room"  her mum read her thoughts easily and shared a comforting smile with her
"He was a proud man !she whispered with a slight hint of sadness , unconsciously Eve found her right arm hung around her brothers blossom in comfort,she didn't know what to say to make the pain go or to make things okay,her parents may not have been what she desired but she saw that they loved each other,chief judge or not ,she knew her father always took her mum out and bought fancy things for her or just stay at home with her to talk ,and her mother was going to miss him deeply
"I'm sorry ,mum!
She sniffed in reply wiping  her tears then offered a sad smile " It's okay ,I'll live ,I'll miss him but I'll survive ,and you too!
Eve nodded but hugged her mom ,they stayed there for some time before untangling,her mum went back to folding her dad's clothes,they were going to offer them to the less privileged,there were just some clothes that could cost thousands of naira and  Mrs Johnson didn't want them to be a waste
"You are on a date! The announcement was out of the blue
"Huh?
Her mother's empty eyes filled with excitement immediately
"You are acting weird !Eve said with a frown  but her mother only laughed
"I'm happy for  you. She replied admidst laughter
Mum! Eve remarked and her mum quieten
'Okay ,you are going to meet your future husband,he asked for my permission to take you out!
Eve's face contorted into a frown
"I don't want to meet any old man!she exclaimed, irritation evident in her voice,but her mother only stared at her in confusion
"Old man? She questioned ,still confused
Eve nodded before explaining "I'm engaged to William Black,dad's friend ,age mate and client ,I have met him several times....
Laughter echoed in her ears,Eve pinched herself to be sure she wasn't hallucinating,but yet the pain on her arm told her her mother was laughing crazily at her
"Why are you laughing,what is funny?But her mother only clutch her stomach and laughed more,Eve wondered why her predicament was so funny ,first it was Sammy that was laughing at her now it's her mother
"Stop laughing !she whisper yelled at Mrs Johnson,she hated this one sided blind comedy,  "they should all make the joke known so I can join them"She thought sarcasm dripping on each word.  As if her mother just couldn't laughed again she ended it with coughs ,Eve exhaled deeply thanking God that the woman in front of her had finally come back to her senses
"Okay mum,what is so funny about my situation?
"You are not marrying William,at least not the old man please .....but his son...
She paused to watch the effects of the news on Eve,and the young lady looked shocked but she continued
....and the young man is totally single and hot,please it's the son and not the old man,ah Eve ,I know I'm not your favourite person but I would have smuggled you out of the country,first thing is MRS BLACK would have skinned you alive ,she's like a female gangster old but can whoop your ass .
Eve smiled in relief ,but another feeling intruded her mind , anxiety. She suddenly became anxious over meeting a single and hot gangster ,maybe proud ,or a murderer.
"Don't worry ,he's a fine specimen ,at least when I met him ,he had respect and a good ,sweet character,he even serve me lunch ,he will treat you right!
Her mother said with a smile ,Eve's cheeks turned a pinkish reddish shade
"I know right! Eve muttered to herself as she looked away from her mother so that her mother won't notice the stupid blushes

. She took after her mom's complexion,fair ,almost albino ,but her jet black hair and eyes could not make her one ,her mother did have the brown cat eyes which Eve wasn't a fan of ,don't quote wrong ,she still saw her mum as one of the most beautiful woman in the world.
"It's by 4pm!
"Huh?Eve exclaimed in shocked,she turned immediately to the wall clock ,it was already 1pm ,indicating she spend 3 be hrs with her mother and had 3 hours to be get ready for her date ,not only that ,to do her morning /afternoon chores too.
"Ugggh....I don't have a dress,mum.
Her mother smiled warmly at her
"Eve you don't need a dress,whatever you wear suits you,dress like you ,dress to feel comfortable!
Eve smiled widely,it's like she's been waiting for eternity to hear those words from her mother's mouth, she has always thought maybe her likes for trousers was what had made her parents dislike her, not like she was a tomboy or any thing ,she just felt more comfortable in trousers than skirt and she had been like the only girl in her department and the guys had robbed her off dresses,though whenever she wears one  she was like bomb ,a reason Eve hated her thick figure ,she will eventually become everybody's attention and the scorn will begin.
Leaving those thoughts behind,Eve concentrated more on her chores ,she still had a date to prepare for.

What do you think of the mother -daughter relationship,how do you like Eve?