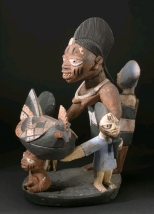 
From her window, she could see the main street Babylon as it was called was too lonely. The year was fading away. No noise was heard from the vicinity.It looked like the children have gone on a vacation.this used to be a place of laughter -quite g*y. This was the only street where laughter wasn't sold, as in cinema films or comedy show. It is everywhere even right before you, where children aren't afraid to play their delinquent -such like speaking in their  local dialect to the elders "si m goodmorning" while the grey hair will reply "good morning nwa m" and the lad will burst into laughter, after on they have play him into greeting them which is not right . With this beggar's description, one needn't to seek happiness  in Babylon because it was all there along.
The numerous bungalow which form part of the main street popularly called'face me I face you'  due to the pattern of the building in which one row of bungalow face the other thereby forming a quadrangle, so with the number of bungalows therefore making privacy inevitable;was silent. If one should come along in the evening time, you wouldn't miss seeing little school children running around unclad, some might hold a shirt with no button flying it around his head while running to catch up with his playmate;his words trailing  after him"onye kpele azu,nwunye mbe" with laughter each lad increase their pace, nobody want to be the last man to avoid being tortoise's wife. It was all fun to watch,she smile sweetly remembering her own childhood experiences.Eventhough she wasn't allow to play with kids, her dad will always warn her and her siblings calling such playful kid miscreant and ghetto kids as if they re not living in the ghetto as well except there's is the only three-storey building and they re living in the top floor.Time truly flies, how many years back?

All episodes of this story can be found here >> https://www.ebonystory.com/story/her-idol

. It's twenty-eight years give or take two years to be precised.Now the street is silent, folks and friends moving away to look for bread or greener pasture.It looked like everybody knows that Babylon is dying and were mourning it silently.
Right inside the flat, there were sharp intake of air."it's not all about you but us"....mrs. ifeoma said,her tone indicating frustration and vexation, she was looking at her husband  for  assistance knowing fully well that word against hers might be furtile.
"well let 's leave this discussion for another day"...he said not bothering to look at his wife because he knows quite well what to see-small wave of disappointment mixed with resentment, it's all there, but he don't care again, he won't allow her to push him into coaxing her daughter to go against her own will or dreams; not anymore .He knows it won't augur well for him. This is not the first time, they have made decision for her and she has gone contrary to it and it won't even be the last. He knows her mind is already made-up, in his inner mind.He wishes her good luck
"I will be leaving tomorrow  morning "...she let the hell loose
"what! "....her mother yelled, her voice rising with her temper.She was fuming,staring right at her, it looks like an eye duel of children, where the weaker eye succumb and look down -plea of guilt;he wasn't left out, Mr Sunday was transfixed for a moment. She could see the visible  line of emotion running  raw on his face but he tried to play it cool.
"Honey "...he said touching his wife for the first time on the shoulder. "calm down, I think she is old enough  to know what best for him"..
"really!?.. She asked rhetorically  making it sound like a question  than exclamation,with that she hasten her pace out of the room without bothering to look at her daughter at her daughter  or husband. She knew the game is over and there is no going back
But he stayed on;watching her silhouette walkng towards their bedroom-the only room they shared; he knew that he isn't having a sound sleep tonight. He turn to her once more
"what s the name of the place"...it is fifth time he av asked her that question and he only got one reply"birnin kebbi"
He sighed again,she knew that he wasn't in support of her decision but this isn't the first time. If she had listen to them fatback,she won't graduate by now,rwding English wasn't their ideas,it was her. She could remember the event so vividly in her mind. How could she forgot that faithful Monday? When she went to the cybercafe to fill the jamb form. The guy behind the computer system asked her"which  course? "
"just put any course dear"..she chirped in
The guy was amazed, in his line of work, he havn't met someone who don't actually know what she want to study in university.Their eyes met and he saw the seriousness in it. "young lady, I think you should go and come back tomorrow "..he said. "am not going anywhere  without that jamb form "she added dryly."But I thought you said you don't know the course"..he asked staring at her confusely."I do, my parents want me to study law but I don't like that; I do prefer mass communication, for the three years now I av seek it up to no avail. "...she breathed  down. The pain was there,almost all her friends that finish secondary  school with her is either in their second year or third year in higher institution and she is still seeking for admission. That was how the guy put English for her. It was four years back.
"when are you leaving? "...his voice bring her back to reality. "first thing tomorrow morning "...she said c*ressing her phone;she knows that notice was too short but that the only way she would leave them out of options. "OK till then "...he said closing the door slowly.she smiled, it quite different to be away from home,the feeling to explore new environment and make new friends."sister!, I will miss you"....Ben finally got his voice, he av been silent watching the whole scene with amusement."me too, Ben" ...she said"where Re you going? "..."I av rendezvous with Akunna,will jog to stadium together "...he said moving swiftly,pooped his head back into her room"see you when I get back " ..."OK,you keep out of trouble"...she said,but he didn't hear it even if he did,she didn't get a response.She resume her watching,the whirlwind gathering flirt and spreading it around,the tonaldo raising dirt-up. Babylon was silent except for the occasional pounding of mortal by the neighbor living in the opposite flat.
"Today must be sunday"..she soliloquised reaching for her phone which she had left on the bed.It was 23rd month of October-sunday.she smiled;that the reason the pounding was coming from their neighbor.They lived the life of nomadic farmers,not always at home, only until Sunday;their day of rest as well as worship but religion was far from them; they hardly go to church. She could remember her father's warning

Other Episodes of HER IDOL ↓