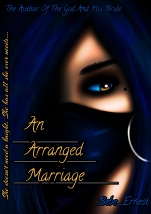 It's the day after the twins birthday and I'm trying to open presents with them I can feel his eyes on me and I know he's watching me it's just two days to my ultimatum but he's doing nothing yet.

If he thinks I'm going to go back on my word then he has another thing coming.
It's been hard I will admit, it's been really hard sleeping in another room from him but he hasn't even apologized I think he believes I will go back on my words but it's not going to happen because I have to find out what's the deal about all this is anyway.
His father knew my sister, that's too much of a coincidence.

"You should probably forgive him now "
I turn around at those sacrilegious words from Anaya.
Did she think I was joking too? I know she knows nothing about why I am angry but she did not just say that.

"Stay out of it" I say, waving a slinky night gown at the girls, courtesy of Linda.
They squeal, rushing to grab it, acting like they aren't listening to my conversation with Anaya.
"Woah?" She asks, her eyebrows up.
"Yeah, Woah" I say, not in the mood to be deplomatic.
"Do you want to explain what actually went down?" She asks and I think about it, should I tell her that somehow Kane's father had known about our sister? No, I have to find out why and how Kingston King knew Asaali.
"I would explain to you later" I say, turning over a simple looking box and shaking it in my ear, trying to figure out what is inside.
"Well, you should do that quickly, what ever you have to get over, get over it quickly, he's at his wits end, he will run mad if you delay this any longer." She says and I roll my eyes, Kane is fine, I'm sure I'm the only one affected by our fight.
"Let me.ask you a few questions straight" She says.
I nod.
"You've not said a word to him since that day have you?" I shake my head, everybody knows that we barely have spoken to each other.
"You've not been in your room have you?"
"Nope"
"You've not made him any meals have you?"
I blink, refusing to allow any emotion through.
"We are having a fight Anaya, these things do not happen when one is fighting with another person" I say, as if talking to a simple person.
"I know that, but can't you see?"
"See?"
"He's barely touched you, i know because we can't hear you scream every night again, it's taking its toll on him"
Again, Kane king cannot be stressed.
"You don't believe?"
"Anaya...."
"He's barely in the house these days, he barely speaks to anyone, he barely eats, he looks like he doesn't sleep, he looks like he's on a tight leash, he looks like he's a state of always holding himself back from hurting smeone, he looks deranged"
"What?" I whisper, willing my eyes not ti stray to where he is seating at the fireplace desk.
"He's trying to give you the space you need Anadia, don't you understand? I know whatever he's done has warranted this treatment you are giving him but the way it's looking it's as if you are willingly suffering him"
"I'm doing no such thing!" I hiss.
"I know, I know.. Just..

All episodes of this story can be found here >> https://www.ebonystory.com/story/an-arranged-marriage

. See Anaya, look at him and see" She says nodding in his direction and I finally let my eyes stray to him.
He's going over some papers, to an outside eye he might see impeccably put together but from here I can see his fingers tapping on the table, he looks close to shouting.
Cash says something to him and he lifts his head, he has dark circles.
My heart stutters.
"When?" I ask.
"probably the first night you slept in the guest room, he's had those dark circles since."
Oh my God.
I didn't want him to suffer, I just needed him to be more open with me.
"Be careful Anadia, so that when you are done with this treatment you don't lose your husband along with it"
"But you don't understand..."
"I think I do, you need him to let you in, you need him to share his demons with you, but you of all people should understand that demons are tricky things sometimes, sometimes you get so used to them that you forget there is someone there for you, why don't you let him share those demons with you in his own time? "
" But I can't... I can't wait that long, what if he never does? "I ask. She smirks, suddenly getting a nasty look.
" Sister, you've got wiles, why don't you wring it out of him like you do something else? "She says, sexual innuendo dripping from her tone.
" He doesn't let me... "
" Think, I'm sure you can come up with something "She says and my eyes lift again to see his on me.
I quickly look away, I have no idea why I did that.
" Y'all just building this up, your make up sex is going to be hot "She says and I hit her with an empty present box.

AN
I'm sorry for this short episode and the single update and the skipped update yesterday.
Forgive me.
Tomorrow's gonna be three episodes I promise.
Please, please, please bear with me?

Other Episodes of An Arranged Marriage ↓