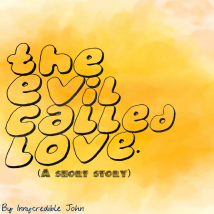 Love is whimsical and temperamental. It comes when it pleases and goes away without warning, it's nature is ephemeral and transitory. Accept and enjoy it while it remains, but spend no time worrying about it's departure. Worry will never bring it back.
Alfred sat in the empty classroom thinking about the fight with Fummi, he knew he was right and only being a friend by protecting her, but he knew sometimes prefer to learn from experience than advice. He choose to let her.
There she was enjoying her 'so called life' with the guy of her 'so called heart' . And he was left here by conscience and the universe, wallowing away in misery and self pity.
"Alfred" Pinky called. ( He did not see her walk through the entrance, and honestly didn't want to see her).
"Hey pinky" he answered rather unwillingly.
Pinky was one of the prettiest girls in his class and also had an influence in girls affairs, every girl either wanted to either be her or envy her. Though they were some who thought of her as cocky and proud, but she had a habit of winning anyone who went close to her.
"What are you doing all by yourself?" She asked with concern in her eyes.
"Was thinking about school stress" he said with a fake smile.
"I have not been seeing you around Fummi of late" she said, pausing only to let him see the devilish smirk she had on her lips.
"I hope you guys did not get into a fight or something" she finished.
"We did not!" Alfred's reply was harsh but firm.
"Well if you say so" with that she sat down to read.
It's not that Pinky could not mind her business, but her care and concern got the better of her in situations like this. She could not sit to herself and read knowing fully well that Alfred was not okay firstly, and secondly, because she had information that could help his situation pertaining to his cause of worry.
Pinky knew, a few people knew, that Alfred and Fummi's friendship was solidified because Alfred had secret feelings for the 'Fummi girl', but as a 'girl' she knew that girls rarely, hardly, dated their friends

All episodes of this story can be found here >> https://www.ebonystory.com/story/the-evil-called-love

Hope you find this story interesting?
You could share your thoughts on it by commenting below.
I particularly love this episode, Alfred deserve happiness.
And Fummi got her purse back. L.O.L.

Other Episodes of The Evil Called Love ↓