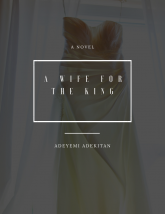 
Pamilerin instructs the driver to pull the car over, in front of the office building, she  wants to check in on Alexander, in his office before going home. She sashays to his office, remembering the time they used to work together, trying so hard not to jump him in the office, but today she is a woman on a mission. She could not bring herself to wipe the mischievous smile on her face she head to his office, some of his security details  were in the reception area, they greeted her respectfully as she walk past them.
Two more security guard were stationed at his office entrace.
"Your majesty" they both chorused.
"Good evening. I hope the King is not busy with someone?" Pamilerin ask, it will not do to walk in on him when he is with someone.
"No your majesty"
"Alright, thank you" pushing the door open. "Hello Darling" , Pamilerin greets as she walk in. Alexander drop the phone he was about to press to his ear in surprise.
"I was just about to call you baby." Grinning at her. Pamilerin eased his swivel chair around to create room for her to sit on his laps.
"I thought I should check in on you before going home." Playing with his tie knot.
"Glad that you did, how are your parents?"
"They are fine, sent their regards"
"Good to know" he mutters, drawing her close into his arms, kissing her ear. "Uhnm I am glad you came, I was just rounding off" his hands caressing her, causing a tug of quiet excitement deep in her belly.
Pamilerin's eyes radiates joy at his admission, pressing a kiss on his lips. "Good. Because I came to steal you away from work, you look stressed baby" she voiced, running her hands on his cheek, beneath his eyes were visible signs of strain and tiredness.
"I know dear, lots of things needs my attention, being a king is no funfair as you must know by now, that is why it's amusing to me how my nephew is going round trying to discredit me, so he can rule."
"Why didn't you say anything love?" Concern lacing her voice.
"Its nothing to worry your pretty head about. He has failed already, soon i will have an heir and he will shut up totally" he declares with confidence.
"I trust you. Speaking of heirs, why don't we go home and we can start working on the process?" She whispers suggestively, kissing him deep enough for him to catch on, that's if he hasn't already.
"My sentiment exactly" kissing her back, in no great hurry as he was loving their moment together. He kissed her like his life depended on it. His er*tically soft yet firm lips plundered hers with passionate hungry demand. His heat and hardness burned through her clothing, as he touched and caress her in the confinement of the chair. Pamilerin responded like a woman starving for water in dry land. Heart pounding, pulse racing, heat like hot white lava shoot to her core as she clings to him.
Alexander slowly eased back, dropping light kisses on her lips. "We need to slow down darling, before things gets out of hand" voice drunken with desire.
"I won't mind if it does, the door is locked" she whimpers, seeking his lips.
"The office will not be comfortable for what I have in mind, and I intend to enjoy every minute of it. So let's go home" he said, Exhaling softly, running the pad of his thumb on her lower lip, grinning at her.
"Hnmm I can't wait to experience it".
######
Alexander kept every bit of his promise to her when they finally got into the privacy of their room, making her yearn for more of his hands on her body, her skin bared to his devastating kisses and c*ress, her mouth thoroughly plundered by his hot intense pant twisting kisses. He make her feel desirable, awakening intense passion within her.  He only allowed her to sleep after he has had his fill, and his ranging aroused libido has been sated.
Pamilerin woke up in the middle of the night, she finds his side of the bed empty. She called out to him softly, but he was not in the room. She missed him already, wondering where he could have gone to, she snag on her robe over her naked form, padding softly out of the room to check him in his study.  She was not surprised to see the light in the study on.
Alexander does not know how to rest, determined to bring him back to bed, she found the door to the study slightly ajar, her hand hover on the handle but, what she heard cause her to pause in her tracks, Alexander was on the  phone with someone.
"I never loved her, but now with the way things are, I am ready to move on" Alexander said to who ever was in the room. Pamilerin gasp with pain, taking two steps back quietly,  before turning and leaving as quietly as she came. Now that he has gotten his ability back, it is obvious he did not want to waste his time with her again. He wants to move on, neither does he love her. She stumbled back on the bed, it was all lies, but she will be damned if he thinks he can get rid of her easily.