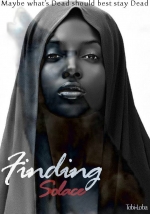 Her old life ended when she loses her memory. Perhaps, it is good when what seemed to be dead stays dead. Caught in between two men from her past and her present. She can only find solace in one or neither.