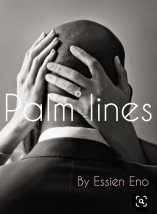 Hello everyone!!! Sorry I've been away for some time now. Just trying to focus on my final exams. I hope you all miss as much as I do.

This is another story titled "Palm lines" I hope you'll love it.

They say our lives are in the palm of our hands. Palm lines tells a story of Erika Nkwachukwu, a thirty four years old woman in her spiritual, but yet infuriating journey and desperate search for marriage and joy.
Something happened along the line.......something that might change the course of event in her life; for better or for worse.