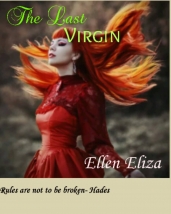 Turned her life upside down.

It was their tradition.

Her and the four boys she had grown up with, to sit around a bonfire and play games during the full moon every month.. And that day was no exception when they'd played the game of truth or dare.

In an era and century where being a Virgin was no longer a big deal.

Where you were considered too religious or boring if you were a virgin.

She was twenty two years and swore to her maker to remain a virgin till marriage.

But that night, it all changed.

Those four boys she considered her best friends were actually no more boys, she failed to realise.

They were now men who had s*xual cravings and Annamarie's answer that night had gotten their curiosities piqued.

That night, she was r*ped.

By all four boys.

They took turns until she died.

Scared, they run for their lives . Now, Annamarie woke up.

She found herself in the land of the dead.

The place where the souls of people who died prematurely went.

There, she met Hades, the Lord of the underworld.

He offered to bring Annamarie back to life, but in a different family, place and time.

A deal was made.

Fast forward, fifty years on, Annamarie was born to the Kent family and named Valerie Kent.

But Valerie doesn't remember anything about her past life.

And along with Lord Hades bringing her back to life, there were rules.

And rules were not meant be broken.

Rule no 1: She was going to gain supernatural powers on the month of her eighteenth birthday, during the full moon.

Rule no 2: She had to specifically use her powers to kill the four boys who r*ped and killed her and no one else.

Valerie broke all the rules.

The earth shook with his anger.

And just like when every rule is broken, someone had to pay the consequences.