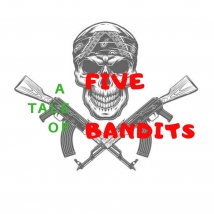 A Tale of Five Bandits

After the decimation of her home, Adesewa is forced to live the life of a bandit in order to survive. Soon, she seeks vengeance against those who had wronged her until her path crossed with that of a fellow outlaw just like her, offering her complete immunity from the crimes she had committed.
She eventually discovers that this deal, sweet to the ear as it may seem, comes with a price; her involvement in a political agenda against the tyrannical King.
Forming a cohort with four other outlaws and an herbalist, she partakes in a rebellion against the King.
Now, the five bandits who had once terrorized the Kingdom itself now becomes the very heroes that could save the Kingdom from utter destruction.