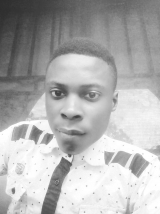 In the palace of Oba Ademola, the king is sitted together with the Otunba, Iyalode and the other chiefs of the land. He appears to be enraged, pacing up and down his chamber.

OTUNBA- Kabiyesi, we know the issue on ground is very serious, but these people are not worth the stress you are putting yourself through.

IYALODE- Yes Kabiyesi. I agree with what Otunba has said . Truly one bother in this type of situation but then, it is usually said that the child that will not let his mother sleep, he too will not sleep.

IYALODE - (continues) Kabiyesi, I would suggest that instead of ruminating endlessly over this issue, let us show those people that we are not what they take us for.

OTUNBA- Beeni, Iyalode is right, we cannot sit, fold our arms and let them take us for a ride, "Abi ki le ni mo so??"

KABIYESI - (Returns to take his sit) Hmm. I thank you all for your concern for me and for this kingdom. I have heard all you said and I also think it is high time we showed those red cap fools the stuff we are made of. No one breaks a bee hive full of bees and expect to get away with it. NEVER!!!!!!

(The chiefs nod in agreement to what is said by the Kabiyesi. The sound of the flute fills the chamber )

*TYPED AND COMPILED BY: DANNY*

(Ichie Okoro and friend Mazi Maduka are having a discussion, tumblers of palm wine on the small table set before them, from which they sip occasionally as they discuss. )

ICHIE OKORO - (laugh hysterically ) I told you the igwe would not take it lightly those people....this is just the beginning.

MAZI MADUKA - (takes a sip from the tumbler before replying ) they are very funny, what were they expecting, ehn?.... that they would insult us and not get paid back?

ICHIE OKORO - I trust the Igwe, no one dares to insult him and gets away with it. The most annoying part was that when the fools were called on to say something, they had nothing significant to say, he only insulted us all through, that too with so much CONFIDENCE.

MAZI MADUKA- Ehn Ehn...... I thought the reason for meeting was to bring everyone together.

ICHIE OKORO - Yes it was, but then, you don't expect two powerful individuals to be in a place without a show of superiority from one of them. Those palm oil soup people wanted to try it but they met the wrong set of people (hisses) . Ndi ofe mmanu.

MAZI MADUKA- I have always wondered why that boy would do something like that, he should know his father. Such rude and disrespectful in-laws can never be accepted by the royal family.

*TYPED AND COMPILED BY : DANNY*