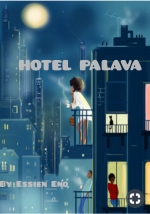 It's been a while since I posted here.
Sorry I haven't been able to post due to test and exam but I'm here again with some thing new titled - HOTEL PALAVA

Summary
May hotel staff anticipates the coming of the new manager, Henry Babalola all the way from London.
When Henry decides to pay them a surprise visit, Adesuwa Ighodaro, a maid at the hotel walks into a guest naked.

Find out how the drama unfolds in "hotel palava" when events play out wrongly and the guest turned out to be the new manager.