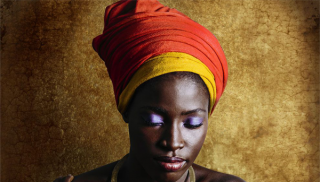 Was She Cursed? When Life Becomes A Punishment.

Nneka had just moved into her uncle's house at Awka, her parents had just been buried. They died after being involved in an accident while coming back from a burial ceremony, she cried throughout the burial, as she could not understand how she will live without her mum.
They lived in a village in Ogidi, Anambra state. Her father was a poor farmer that combined his own farm works with working on other people's farm lands, and was also a laborer . Her mum was a house wife, but in the evenings, sold roasted corns and pears. Nneka was the only child. So everyone understood the bond and closeness that existed between mother and daughter. Whenever Nneka was back from school, she spent the remaining time of the day with her mother, and they discussed as if they were class mates. Nneka saw her mother as her best friend as she told her every thing. Now her best friend and mother was gone. Her world crashed when the news of the accident got to her.

Mr. Tony, Nneka's uncle haven't seen her for many years, till his brother died, he hated going to the village because all the villagers see him as is a 'money bag', he only sent money to his brother once in a while, so he did not know how grown up Nneka was.  When he got the news of his brother's death, he came to the village to not just bury his brother, but to also take Nneka with him to Awka. He was a part-time lecturer at UNIZIK and owned a restaurant and two publishing houses at Awka. He was expecting to see a kid of 10 or 11 years, but met a young lady of 15 years.

After the burial, Nneka left with her uncle and his family to Awka to start a new life without her mum. The first week of her arrival, all she did was stay in her room and weep uncontrollably and could hardly be consoled. But by the second week, after her aunt talked to her, she brightened up, as she knew nothing would bring her parents back. She started spending more time outside her room, and with her two cousins, Francis and Silas.

One evening, when his family left for a church programme, and Nneka was asked to stay at home since she was a catholic and they attended redeemed church, Mr. Tony came back and saw Nneka sleeping on the couch, wearing just singlet and shorts. She must have slept off while watching a programme because the television was on. He had thought Nneka was just beautiful, but that evening, he realized she was also becoming well endowed and had a very fine skin. He dropped his suitcase and car key on the dinning table and got to where she was sleeping and started c*ressing her. Nneka felt a hand touching her and woke up immediately, to her surprise, it was uncle Tony. She tried to run but he was obviously stronger than her, he r*ped her.

After the horrific incident, Mr. Tony got up, and with a smile of satisfaction, mockingly said to her 'you this bad girl, so you have been enjoying this thing since, you are not even a virgin any more. I thought you village girls are the good ones'. He picked up suitcase and key and left her there. Nneka wept bitterly, she had just been r*ped by her uncle and mocked also.

Yes, Nneka was no longer a virgin, but not because she was enjoying s*x, it was because her father started s*xually abusing her when she was 12. She told her mum the first time it happened, but her mother refused to believe her. The next time she told her mother, she was beaten mercilessly for trying to accuse her father. When the accident happened, she felt happy to an extent because her dad won't be sneaking into her room anymore, she was finally free from the monster. But here she was now facing the same monster she thought she left behind at the village, coming back to haunt her. She already knew from her experience with her dad, that this was not a one time thing, and she was right because the night of that same day, her uncle sneaked into her room and s*xually abused her again.

Nneka knew she was heading for darker days in her uncle's house. The abuse continued for months, some times even when she was taking her bath, Mr. Tony would sneak in and have a go at her before leaving, other times when they were alone, and in the sitting room, he would ask her to come sit on his laps while he s*xually molested her with his hands.
At a point, Nneka knew she just had to talk to someone about it. She could not tell her beautiful aunt because like her mom, she may not believe Nneka, and may even throw her out of the house. The only person she could talk to was Francis, who was a second year student at UNIZIK Awka. When she got to his room and explained everything to him, Francis did not believe her, he also wanted to do the same thing to her, and even made advances at her right there in his room, she ran out of his room. Silas would not understand even if she told him, he was just 7 and was in primary 2. Now she knew she was all alone.

She was in the kitchen preparing lunch for the family the next day when Francis came back from school. He noticed no one was home except Nneka, and realized this was his chance to carry out the thoughts he had haboured for her since he saw her at her parent's burial ceremony. He tiptoed to the kitchen and held her from the back; Nneka was a bit scared when she felt some one's arms circling her waist, she thought 'oh no, not again uncle', only to turn around and see it was Francis. She tried to fight him off but he already tore her top and was going for her skirt, when the frying pan landed on the left side of his head. Nneka hit him more and the more she hit him, the more she wanted to hit him. Francis fell down unconscious and covered in his own blood. Nneka ran to her room thinking he was dead. But he was not, he was uncoscious and seemed heavily injured.

Nneka has never been so scared in her life when she realized what she had done. She thought she had killed Francis, but somehow within her, she felt he deserved what came to him. She went back to the kitchen and noticed Francis was no longer there. She followed the trail of blood to his room and saw him washing off the blood, she felt a bit relieved that she is not a murderer yet. She picked up enough courage and got close to apologize to him and noticed the cut was not as deep as she had imagined it would be. Francis grabbed her and r*ped her right in his room, into unconsciousness. She was so defeated and weak when she regained consciousness, that she didnt know when other family members came back and the blood has been wiped. She entered the sitting room to greet her aunt and uncle and saw Francis with his evil grin. That was when she made up her mind. This was the last straw, she knew she had to defend herself or she would become a s*x toy to both father and son, just like she was to her father.

That same night, her uncle sneaked into her room for his normal rendezvous, and mounted her. He was enjoying what he was doing to her until he felt something sharp pierce his chest, Nneka had stabbed him. He screamed and fell, and Nneka jumped on him and continued stabbing him, pouring out all her pent up anger on him, till he died.
Aunty Sharon rushed into Nneka's room and saw her husband dead and naked. Now she knew where he always went to in the middle of the night whenever he left their room. It was too late to confront him now, she fainted.
Nneka, realizing she just took someone's life screamed with all the pains, fear and strength in her and this attracted her cousins who came into her room. She was really beginning to think she was cursed like her village people had accused her when both her parents died the same day.

A day after the incident, she was in police station and in custody for interrogations by one of the officers. She told him the whole story up till that night and amidst tears, raised up her head to see the police officer looking at her lustfully.
'Now, "she thought" I know I am cursed'.