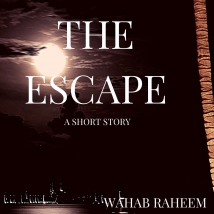 A short story by :Wahab Raheem

Williams sat in the middle row on the floor, shivering and was unable to control his fears,Capoul who was known as the leader and the founder of the group came out to them, Smokes findings ways through his nostrils like the vapour coming from a hot kettle with his red eyes like a blood from a fresh cut on the body. The room was too dark for any of the captives to see what was happening except for the sound of humming and a little lantern covered with a towel placed on the table beside Capoul, nobody knows how many people were in the room.

Williams couldn't figure out what was going on at first, the last thing he could remember was that he slept off after speaking to his mother when the bus was at sagamu, his hands has been tied up with a rope but could only feel the warmth of others beside him, Capoul spoke to one of his men to switch on the light so that he could address the new captives they just got, that was the moment Williams realised he had been kidnapped . Williams felt unease, he suddenly remembered his last conversation with his mother which prompted drops of tears down his cheeks.

Williams closed his eyes when the light was switched on, it was like the scorching sun was placed towards his eyes but managed to see Capoul and his men. The room was large which was undoubtedly previously used for a store, there was only one chair and a table and that what Capoul sat on, the roof has been damaged while cobwebs hung around different corners of the room. Five hefty men stood behind Capoul, all smoking and drinking local gin also holding different types of guns.

Capoul stood up and cleared his voice,

He laughed with great joy and began to sing with his men joining in, Williams' mind was filled with anxiety while many thoughts were flying around his head.

"is this really happening? Am I dying soon? That was the question that kept on ringing in his mind.

He kept looking around to be aware of his fellow captives, he closed his eyes, prayed to God suggesting this may be his final days on the face of the earth, his mind quickly shifted to his mother's advice

" always pray to God in any situation you are in and endeavour to use any opportunities you have in order to be free".

Williams remembers he boarded a bus going to Lagos from Abeokuta on the road side which his mother advised him against, prevention is better than cure they said, he never witnessed the circumstance of travelling with a road side bus until the very moment.

Capoul instructed his men to untie all their hands and lock the door safely but before then he had instructed them to take an old man along saying that would be the first goods to sell tomorrow morning, "what a pity" was the word in the expression shown on his fellow's face. Williams then decided to heed his mother's advice, he then spoke to the man beside him "can I suggest something?" with his wet eyes, "go on" the men said accepting his faith.

"can i suggest a plan to escape" he said, the man managed to release a smile

"I think you are tired of your life right?" the man said with a chuckle "well my name is Demola, nice meeting you in this jungle of danger".

Everywhere was still quiet, no one seems to have the courage to stand up and make a plan, Williams was willing but still needs to convince someone first, Williams turn to the man again

"my mother usually tells me that one has to endeavour to use any opportunities, so let's use this opportunity and escape this dangerous hideout" Williams said with more confidence already built in him.

" Okay tell me your plan" he finally got interested in the Williams plan.

Williams told Ademola everything he got in mind but wasn't convinced enough yet so he got up and told everyone about the plan, some got interested while other continued crying silently. Williams placed the single chair in the room on top of the table to climb to the roof, Ademola got out of the room first then others began to follow, the roof led them to the backyard of the house which a fence was erected and was the only boundary avoiding them from escaping.

Ademola wanted to climb the fence first but the Idea was rejected by others suggesting another person should go first instead, they heard footsteps coming their direction, they all kept quiet for a moment in order to confirm. Everywhere was dark and now totally quiet, Capoul and his men were taking a stroll around the fence in order to be vigilant and avoid any captive from escaping, Williams and others were hiding beside a tank of water beside the fence. Suddenly one of Capoul men suggested "Oga let go to the room once again make we go look those chickens o" managing to complete his statement with the obstruction of his cigarette, then another accepted the idea " nah true boss Capoul'', they walked through the tank turning left to the corner where the door was, "wait o, I dey suspect say something don happen, let go back to the fence o" said the third person , "no joor let go and check first, them no fit run" Capoul said walking ahead to the door.

Williams and other captives quickly jumped over the fence without fighting on who should go first, Williams ran very fast in the thick Bush knowing no where, he just kept on running straight forward, he kept on praying to God to show him the way. Capoul was in a big shock when he got into the room, then quickly instructed all his men to search everywhere for the captives.