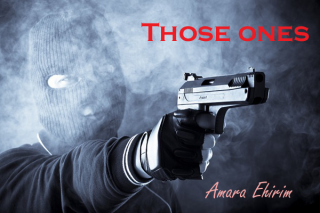 Those ones were the ones Mama told us we would become when we grow old. They were the ones that we saw while going to school in our torn uniform and deformed sandals,riding in their big cars owned by their very wealthy parents.

On days when we had nothing to eat and Mama would sell another 'wrappa' just to buy ''garri' so we could eat something we all called our last supper, Mama would say that  her sons would grow up and become wealthy men and replace the 'wrappa' to a better one. I and my brothers often played the role of a husband to Mama who had lost papa to the Nigerian civil war . Mama Njide as she was fondly called had just my two elder brothers, Njideka,Tobechukwu and me- Afanna. We were not born with silver spoons but Mama had no doubt that we would make her proud, so she strived hard to make sure we went to school.

Njide as he was called, had just finished secondary school when Mama died. Our whole world was shattered, dreams became crushed and because of the dilemma we were in, I had to miss my primary school leaving certificate examination. My brothers and I began to fend for ourselves and were soon referred to as "street boys". Mama never had any relative, at least none that we knew of, so we were left alone, three young orphan boys, to fend for ourselves.

As we stood here, in this dimly lit room, surrounded by bushes indicating we were deep in the forest, those ones we wanted to be like, those ones that Mama sold her ''wrappas' to get us food so our brains would always be sharp and we could read our books and pass, on our way to make her proud. Those ones Mama referred to as "sir or madam" whenever they pulled over in front of her stand to buy roasted yam or plantain and could not come down because the sun was either too hot or they were too tired so bad that they make Mama run after the car to give them their goods after they must have complained of her wasting time. Those ones Mama Nkechi would run to our house to tell mama that "those big men in big cars" just passed her shop. They were the ones we had in this room, mouth gaged and hand tied behind their backs, their eyes begging us to let them go, promising to send the ransom. My brothers and I as we await the callers of the three big men we had kidnapped, stood beside the only phone in the middle of the room, waiting, hoping and praying we don't get busted for our evils.

As Mama's face flashed and the thoughts of our early life raced in my head, I picked up a gun, unable to control myself, letting go of the plans I and my brother had when we finally succeed, of the numerous international trips we'd take as soon as the ransom comes, how Njide will complete his schooling, how tobe will import cars and become a big man, how I'll go to Canada and start my life all over at 25,how Mama would be so proud of us. I let it all go the moment I pulled that trigger and ended the life of those ones Mama wanted us to be like, those fortunate ones.