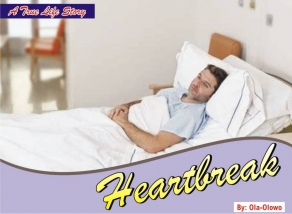 HEARTBREAK
By:  Ola-Olowo
Women they say is a weaker vessel but the people who brought the assertion forgot to add that they are also a wicked vessel too. Just imagine for once if Aunty Eve was not created by God, would things have the way it is now in the world? Imagine if Adam didn’t eat the apple, what would have been the fate of mankind?
My name is Adam. The first child & the first male child of my parent’s 6 years old marriage then . Ever since I was 5 and have known the story of Adam in the bible, I’ve always been careful not to take apple from any female folks. While I was in the institution, I’ve got lots of female admirers but I’ve always thread softly and manage not to get involve in dating but in as much as I tried, my heart failed me. I am this type of guy that gets emotionally attached to someone easily and that was where my problem started.
I managed to be in a mini-relationship with some couple of girls. Is it Jennifer? The Edo girl I met during our matriculation party ceremony? Our relationship was like an El-classico during the reign of Mourinho and Guardiola in Spain. We never get along even for a week. Within 3 months, I couldn’t cope with it anymore. I broke off the relationship. Ngozi! The Anambra babe! My relationship with her started rosy and loving. We met at one of the cafeteria in my department and I realized she was from the music department. Rehearsal today, performance at the multipurpose hall tomorrow. She finished my money no be small. The moment I realized my bank account was giving a red alert, I has to run away from her. Nkiru, Ijeoma, Fatimah the Fulani girl, Mercy. In fact, I can’t name them all. In summary, I have had about 11 short stints relationships between my four years of stay in Owerri. I suffered lots of heartbreaks and it was only by his grace that I managed to pass out with a 2.1.
Two years later after NYSC during my master’s programme, I met Gift. The girl fine die. In fact ehn, she was like a God sent. She drew me closer to God, meanwhile little did I know she was drawing me close to my grave too. My fellow readers, beware of church girls.
It’s been over a year into our relationship and no doubt, I know my search for a wife is definitely over. Gift was definitely the one for me. One day, she called me and said we will have to fast for 100days to seek the face of the lord before I can introduce her to my family and vice versa. I never thought twice about it. 20days into the fasting, I was getting lean. My friend, Kelechi called me to order that Gift can’t be trusted. On the 76th day of my fasting, I received a call from one of my classmates to come to St. Anglican church, Ikot-Ekpene. Getting there, I saw Gift, in a wedding gown with another guy in a white suit. It was Gift’s wedding.  I couldn’t believe my eyes. My body stopped working the moment I got to the gate of the church. The bride and groom were just coming out of the church and I could see Gift beaming with smiles. This was surely the greatest heartbreak I have ever suffered in my life. For the records, I’ve suffered more heartbreaks more than how Owen Hargreaves suffered injury in his entire footballing career. I never knew when my legs failed me, I slumped and everything went black.
I never knew how long I have passed out but I sure know I met myself in the hospital. At first, I couldn’t recall what happened but sooner, it crept back into my memory again. Gift is gone. 76days of fasting was just for nothing. How could she have broken my heart when all what I have done what to love her unconditionally! Is this love?