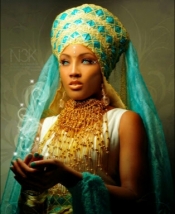 A love story between a river goddess and a human.

But everything comes with a price.

Urenma must be willingly to pay the price.