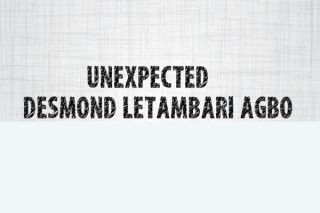 Edwin's Pregnant wife asked him to bring some fruits for her from the Kitchen so he strolled downstairs from the bedroom toward the kitchen but was however distracted by the football being played in the television situated in the lounge.

He sat there for minutes watching his club play against another; taking a sip of beer at short intervals as he yelled at any player who could perform to his expectation. Someone watching him would think Edwin was actually the coach of his football club . The way he gesticulated made it so.

He quickly made his way upstairs again when he heard his wife scream. As he got to the bedroom, he saw Merit, his wife's eyes already deviated upwards and blinking with her tongue protruding outwards. Saliva was fussing out from the corner of her mouth. She tried lifting her hands towards him in search for help and he quickly embraced her. He was so afraid but needed to do something urgently. He dipped his hand into his pocket, brought out his phone and called Felix his neighbour. "Guy, abeg come my house now, wahala dey". He announced. Felix stays in the next flat and is the closest of all his neighbours.

Though Felix was preparing noodles for dinner when Edwin's call came in, he abandoned it and rushed to Edwin's house.He hurried to the Bedroom upstairs and was shocked to see Merit helpless. "What happened?" he asked Edwin. "I don't know ooo. I just saw her this way" "Guy, this is a spiritual attack" Felix hinted. "Make we pray" he added. "I can't pray at this moment, I'm already destabilized" "Then call your Pastor!" Felix suggested.

Edwin put a call across to his Pastor and explained to him that his wife was under a spiritual attack which is making her eyes roll upwards. He asked the pastor to quickly come over to his house to offer some prayers. "Brother, I am not in town at the moment but be rest assured that God is in charge of the situation" his pastor responded. "I will inform the senior Pastor about it. I will also pray about it now" He added.

Edwin was not satisfied with the Pastor's response. He wanted him to come over to his house to pray for his wife but since he could coarse his Pastor to do what he expects he ended the call and starred blindly into the air, looking more confused. Merit's jaw continued to jerk and her neck bent to the side. This made Edwin sore afraid. "Let's go to the Hospital" Felix said. " can see you are confuse now" He added. "My brother, I am confuse truly" He admitted as he cleaned the tears that went down his cheeks.

They carried Merit downstairs together, lifted her into the car and made their way to the Hospital. The Hospital was already congested with patients as they arrived. Some of the patients were already complaining that they have have been abandoned by the Doctors without adequate medical attention since they came while other patients were already receiving medications. Some were seen trying to get their folders.

Edwin and Felix carried Merit into the Emergency unit while a Hospital attendant came to help. Merit was placed on a chair at the reception. Edwin was adviced by the Hospital attendant to go open a folder so that Merit can be seen by a Doctor; He obliged and quickly went to the medical records department.

Few minutes, he was back with the folder. "Can you help me?, I want the Doctor to see her quickly" Edwin told the Hospital attendant. "Actually, there are other patients waiting bros" He replied. "I know but just help me. I don't want my wife to die here". He brought out some cash and gave to the attendant who gladly took the money, put it in his pocket and carried the folder to the consulting room.

"Sir" the Hospital attendant greeted as he entered the consulting room. "My Brother's wife is sick. My brother just brought her now. Can you help me?" "You can bring her when I'm through with this patient" The Doctor responded.

In a short while, Merit was brought into the room. Edwin joined her while Felix waited outside. "Doctor, take this patient's history quickly, examine him and tell me your diagnosis" the Doctor told another Doctor who appeared to be his junior. The junior took over asking Edwin some questions and the Edwin answered.

At a point he asked. "Did she take any drug before this problems starred?" "Yes" Edwin responded. "What's the name of the Drug?" "I can't remember, I bought it from a drug store" "Was the drug prescribed ?" "No. She was vomiting so I asked the drug seller to give me drugs that will help her" "Do you have the pack here?" "Yea. Its in my bag outside" He went outside and brought the pack.

Then he handed it over to the Doctor. METOCLOPRAMIDE was boldly written on it. The Doctor went further to examine her and informed his senior colleague when he was through.

"What's your impression" "I'm thinking of an Oculogyric crises secondary to drug intake" "I'm thinking so too. You can go and give her an antimuscarinic that is safe for her, then you send a consult to the Obstetricians to review her" "Yes sir" "You can quickly go effect the plan let me talk to her husband" He called Felix in to join the discussion.

When both of them were sitted, the Doctor advised them to always seek medical help from professionals before going to buy drugs. He further to tell them that what happened to merit was called crises and that it usually follows drug intake but however, it may also result from other medical conditions.

Edwin promised himself that he would not buy drugs without prescription anymore. His wife was given some medications and her condition dramatically became normal. She was also seen by the Obstetricians who confirmed that the baby in her womb was in good condition. Edwin smiled as he watched his smiling. Felix was glad too.