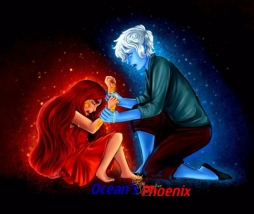 "Mama, I can’t sleep” The young child whined to his mother who stopped singing “What about I tell you a story, my dear. It’s called ‘Ocean Phoenix’, can you guess what it’s about?” “A Phoenix who came from the ocean”. The boy wondered his eyes staring intently at his mother as her soft chuckle broke through the air “No..but I shall tell you”

“In a land long ago, there lived a princess named Phoenix. She was only 7 years old-2years older than you-and had long, curly red hair and eyes that sparked warmth like fire . She was an unusual girl with unusual powers-” “What powers,mama?” The boys large eyes twinkled with curiosity “Phoenix, was a fire user” his mother smiled “She had extraordinary powers but was afraid…” “Why? When I grow up, I want to have powers, too! I’ll defeat all the bad guys and become a superhero!”

The mother laughed as she brought her hand to her lips “That I believe. She was afraid-Not of the powers..But of hurting her loved ones. One terrible day her powers got out of control and she killed her family” The boys hands trembled, “Mama..why did she do that?” The mother smiled kindly at her child. “Her emotions got the better of her. She couldn’t control them-No, they controlled her. She ran away from the village living in fear of execution-” “What’s that,mama?” “A terrible thing,my dear” The mother’s face darkened as if remembering something unpleasant but she quickly covered it up with her usual smile “The young princess hid for 9years until she was 16”. The boy small mouth opened wide “How did she live?” “In the forest. She learnt to control her powers throught the years until one day, she made a friend. His name was Ocean. He had hair as white as snow and skin so pale it seemed blue. They were close-so very close but one day..he left her without an explanation and she began to hate him. After a single week Phoenix’s emotion bursted and-” “But only a week! Why would she hate him?” “Time was slower back then love. A single week seemed like months-years, out of her anger, Phoenix burnt the whole forest down and God punished her for that”.

“But God is meant to be good!” The boy protested and the mother only smiled painfully in return.
“But if you do something bad, something else will happen to you. It is simply life. God punished her into a place unknown to mankind. It was cold, harsh & painful. God left her there for 40days but after her time, she refused to leave and trapped herself their with torturing handcuffs that squeeze your wrists. She thought, that the punishement for 40days simply wasn’t enough. So she continued to trap herself there for the deaths of her family”. “Why?” “Because she blamed herself but it wasn’t just that, she wanted Ocean to come back yet in another way, she simply wanted die. If Ocean came back, she wouldn’t know what to do” “But why did he leave?” “Well pay attention to the story and he will tell her himself” she smiled lovingly “So he comes back?”

“Yes. He came and tried to help her but she refused his help. The cuffs tightened even further as she spoke a lie..she did want his help, yet,she refused. The cuffs tightened again and she began to bleed golden blood, it was as if her blood was made of lava yet the cuffs didn’t burn. Eventually, he held her wrists and pulled the chains and they broke. She was surprised of course as the cuffs had an enchantment-” “What enxhantment?” The young boy asked eagerly “That they can only be broken by an act of True Love” “Ew! Love is all that kiss that kiss this! Only girls do that!” The boy exclaimed and the mother simply laughed “You’ll understand when you’re older, love-But for now, I’ll finish up the story. But when Ocean tried to pull the girl away, she resisted but that simply hurt her even more because little did she know, that Ocean also had special powers, water powers to be exact” “But won’t that mean they’re opposites?”

“Exactly. But Ocean didn’t care whether he was burning or not, he loved Phoenix and he would do anything to be with her but she asked him “Why did you leave me? And you know what he answered?” The young child shook his head waiting for his mother to continue “He replied ‘Because I love you’ and she knew he wasn’t lying. He pulled her into a hug and she didn’t resist. And they kissed. And she accepted”. The mother smiled warmly at her child “And they lived Happily Ever After” both mother and son spoke, “They even had a family together with a son, they named him, Lyall, meaning Wolf because their love was like a wolf pack” she let out a small laugh “They stayed strong. And they didn’t show weakness, they stood up to both kingdoms, Phoenix’s kingdom and Ocean kingdom. They fought but in the end, Love conquers all”

“Whoa” “Yes, amazing isn’t it” “Yeah but mama” the boy frowned “What’s my name?” “Why your name is Lyall of course”.
“And papa? And you?” “My name is Phoenix and papa is my Ocean..I told you, I believe you do have powers and I believe..that you will become a hero”.